How to record a Skype call on Windows 8

For the last few weeks I have had the dubious pleasure of acquainting myself with Windows 8. It is an awkward format on a laptop, clearly designed for tablet computing and it has rather counter-intuitive features that I am sure I will eventually become accustomed to.

Windows 8 boasts “apps” rather than 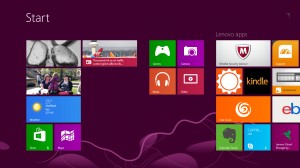 programmes, and although some of these are really quite visually appealing, they lack the fine controls that I like to customise to suit my precise purposes. A prime example of this is Skype. While the Windows 8 app version was bright and bold and pleasing to look at, accessing and adapting my “preferences” was frustrating.

I use Skype a lot, most significantly to record the freelance writing podcast that I co-host but also to talk with clients, colleagues and friends. The difficulty with being an early adopter of new Windows Operating Systems is that much of the software you already use no longer plays nicely: programmes become buggy or refuse to work altogether. This turned out to be the case with the software I previously used to record the Skype conversations that I then edit into the podcast.

I downloaded numerous pieces of Skype-recording software and tested each while dialling and redialling Skype’s Call Testing Service on the Windows 8 app. None of them recorded a thing. Some said they were connected to Skype but not one would start recording, no matter how much coaxing I did.

I initially tried with the software I had always used, the VOIP Free Skype Call Recording tool. A nifty and effective programme that is unobtrusive and generally records well. When that didn’t work with the Windows 8 Skype app, I also tried:

Nothing was working, and Google wasn’t telling me much – just that others were trying, and failing, to record on Windows 8 too.

However, never one to let a mystery go unsolved, and with a podcast to record the very next day, I set about finding a solution, and eventually did.

How to record Skype conversations on Windows 8: The solution

Up to this point, I had been using the Skype Windows 8 app. The user interface was growing on me, and I really was trying to embrace the new Windows experience rather than just revert everything back to Windows 7-type familiarity. However what became clear was that the problem wasn’t Windows 8 in itself, the problem was with the Skype programme being an app.

Finding out how to use Skype on Windows 8 as a piece of desktop software rather than an app was the key. It is not promoted, nor is it easy to find, but you can download Skype for Windows 8 Desktop here. When this has been installed, customise the settings so that they suit your needs.

When using the desktop software I had no difficulties recording calls again, and everything went smoothly. If you ensure that, when you need to record a call, you make sure you use the desktop version of the software rather than the app, then any of the above programmes should work, though it is always worth testing them out before an important call.